The narration created by Nikos Papadopoulos in this exhibition, but also in the whole body of his latest work, is a personal path through Filopappou Hill. He addresses the issue of the hill seen as a garden, a question to which he was led through his frequent walks but also his in situ artistic actions with the “Filopappou Group” since 2001.

The narration created by Nikos Papadopoulos in this exhibition, but also in the whole body of his latest work, is a personal path through Filopappou Hill. He addresses the issue of the hill seen as a garden, a question to which he was led through his frequent walks but also his in situ artistic actions with the “Filopappou Group” since 2001. The garden isn’t a natural landscape, but rather reflects the human beliefs of each time. It constitutes a protected “in between” surrounding with respect to virgin nature, “within the walls” of which we can explore and experiment, review and judge, accept or reject opinions about the relation of man with nature and the universe, about the distinction between the private and the public, about life itself.

The artist started photographing the blossoming “inhabitants” of the hill in order to register its flora. However, during his meetings with the archaeologists in charge of the hill, he discovered that it was formerly called “the City of Rocks”. Photos taken until 1920 testify that its predominant characteristic was its nakedness, with the monument emerging on its top, and only sparse brushwood appearing in the landscape. What happened to turn this dry and naked surrounding into the green paths of the hill through which we walk today?

In a worldwide tendency towards the reconstruction of the shattered Eden, Queen Amalia created the first Greek botanic garden, the National Royal Garden. In January 1900, Princess Sofia organised a planting campaign on the hill. Following the political decision of Konstantinos Karamanlis in January 1957, the architect Dimitris Pikionis took over, not only the surrounding of the Acropolis, but also the hill of Filoppapou along with the research on the flora of the area.

Either as a garden, as countryside, or as an element that grows unexpectedly and almost parasitically within the urban tissue the artist’s  landscapes develop on the white surfaces in an elliptic manner. The drawing surface constitutes the field of his research, on which he unfolds his thoughts, as a result of observation, of study, and finally of comment. The blank space of the paper suggests a beam that bathes in bright light the images and the pen or pencil, respectively, follows the basic rules of pointillism on the white background. The dot takes the place of the grain of the photographic film or of the digital pixel. In this way the poetic transformation of natural objects into images continues through the pictorial language which, first, deconstructs every scene, and then proceeds to its selective reconstruction. Each point of the work imitates the spike of the printer, and each image is constituted by the sole repetition of the point. Against the speed of the mechanical procedure, the artist apposes a reverse temporality, that of the human hand which follows the mind. The prominence of blank space, the unfinished and deteriorated image, reinstates the decision and the gesture of the artist. Thus, through observation and mimesis, Papadopoulos reaches what Goethe called rhythm.

In Papadopoulos’ works on the theme of the hill there are usually no human figures, except one lonely walker gazing at the surroundings, a reference to the famous work of Friedrich. The artist often resorts to the comment of famous works of art, such as the Luncheon on the Grass by Manet.

The tablecloths, with their repeated predetermined patterns, take the place of the natural landscape and vice versa. They here appear as the artificial background of a picnic in the countryside, while there the natural soil, the earth, is used to reconstruct a simulation of a tablecloth. Even the way in which the landscapes of the hill are drawn presents this sort of ambiguity. 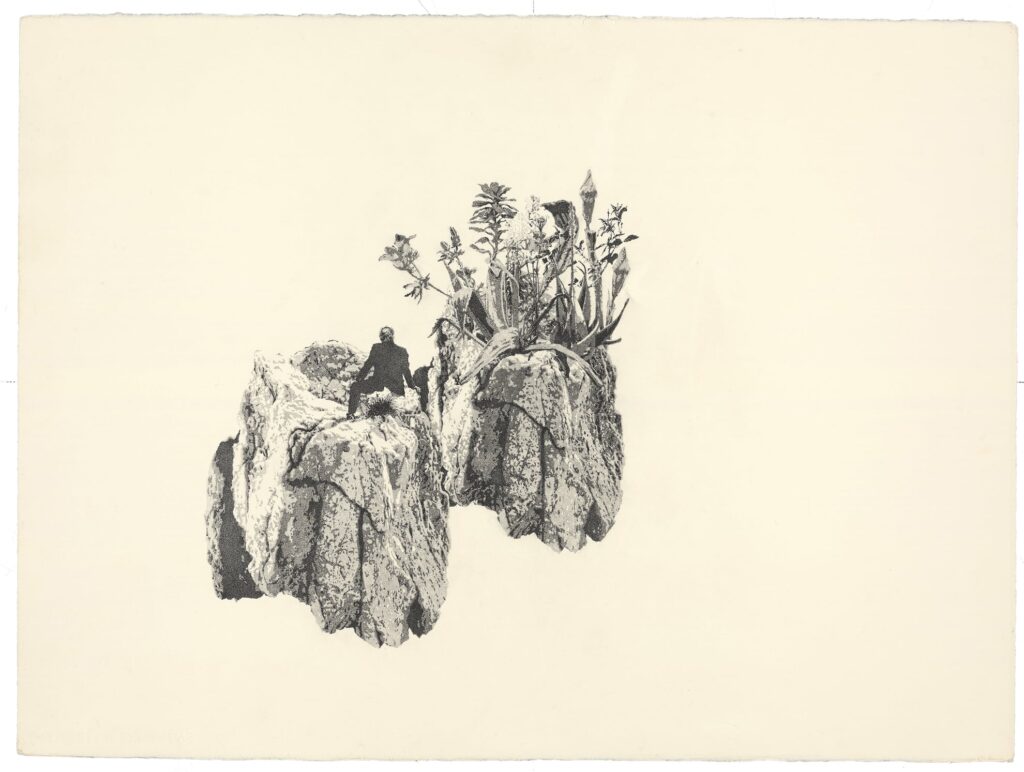 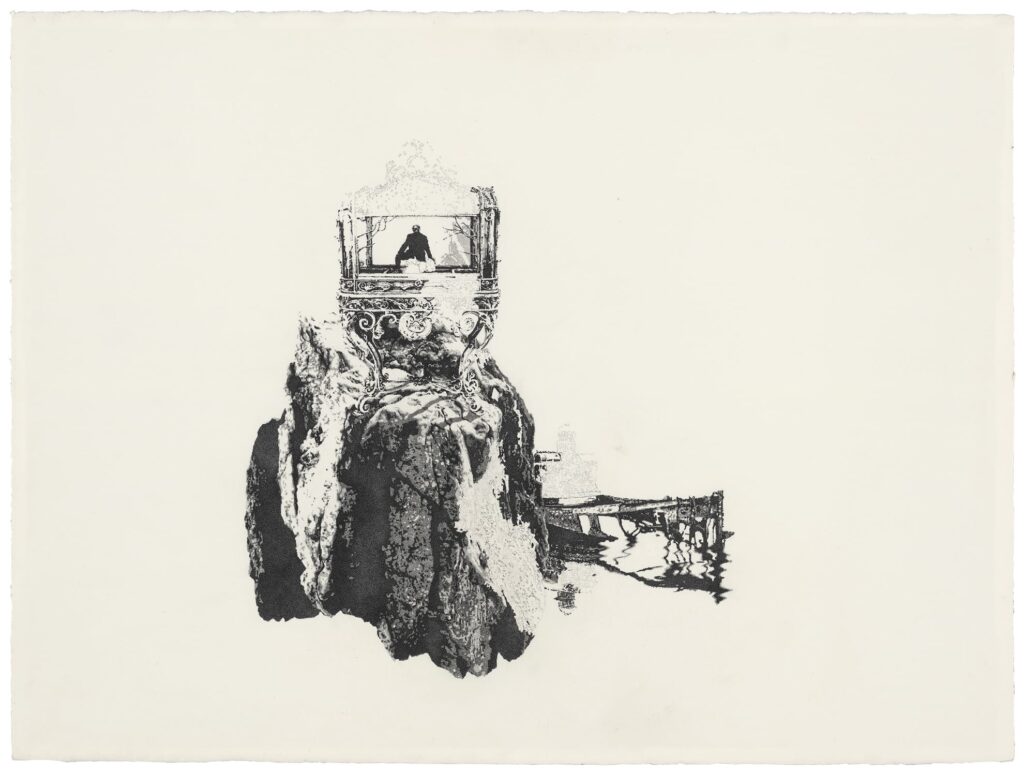 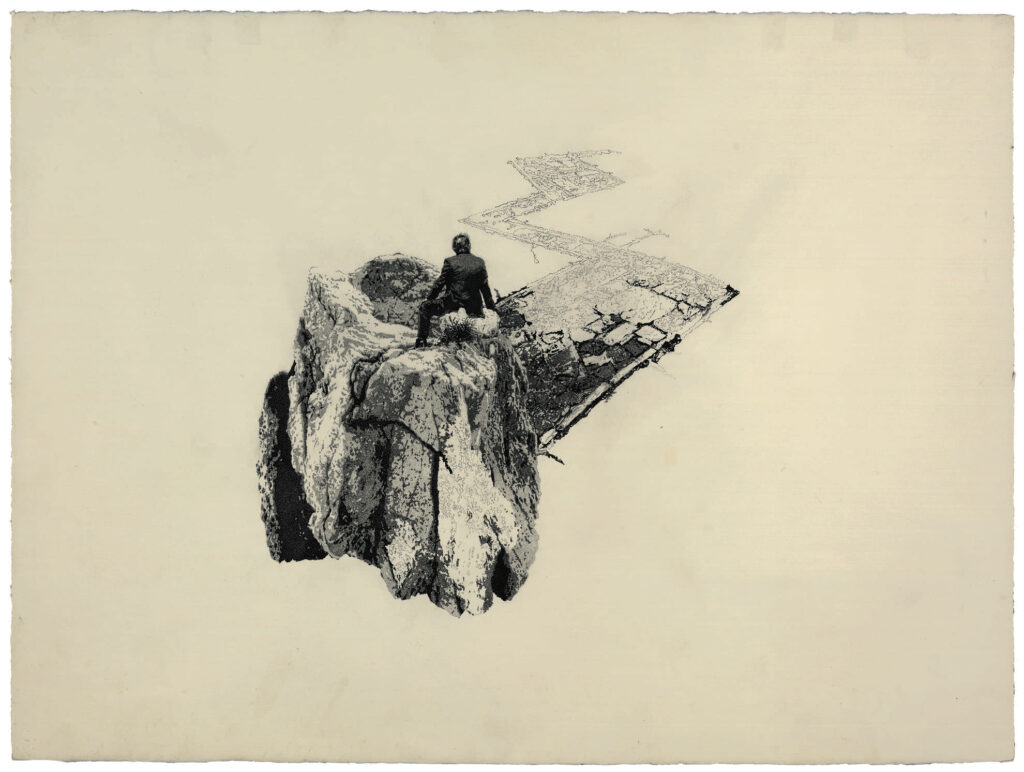 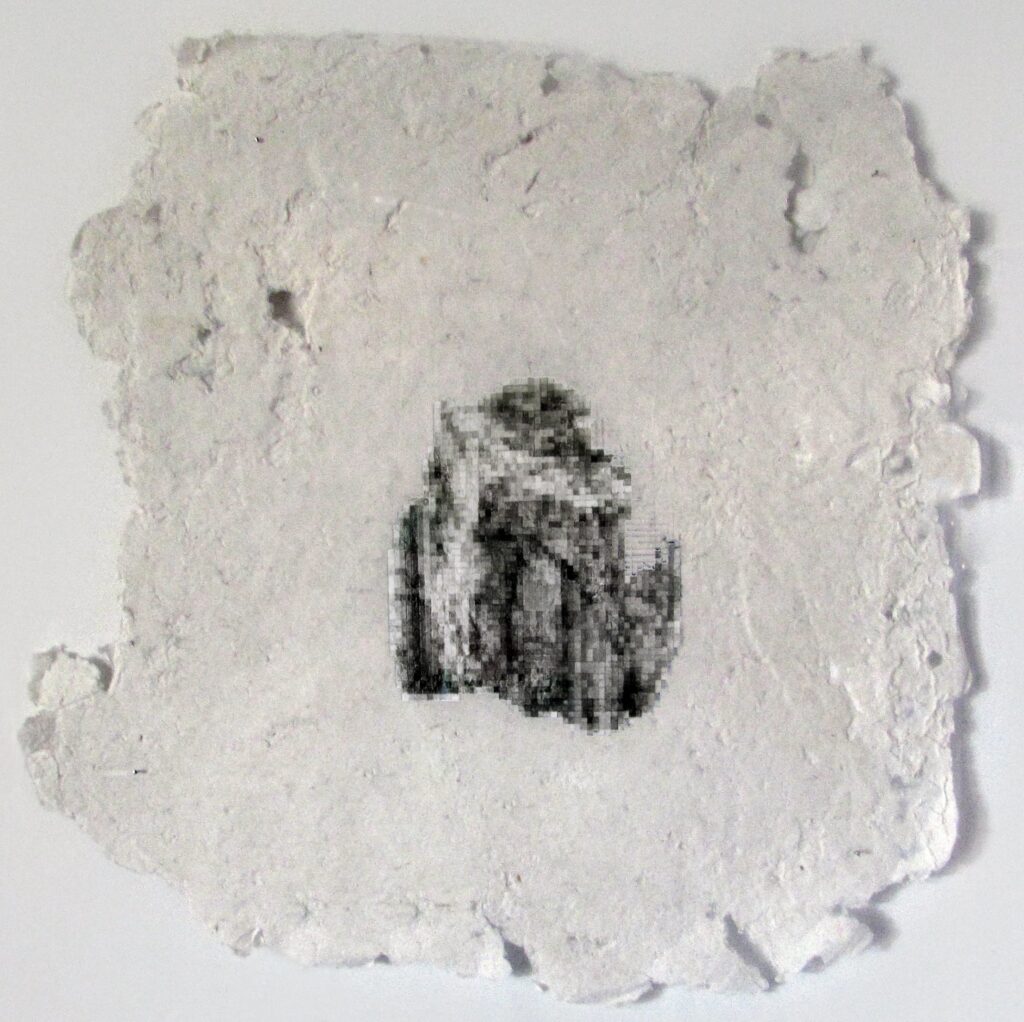 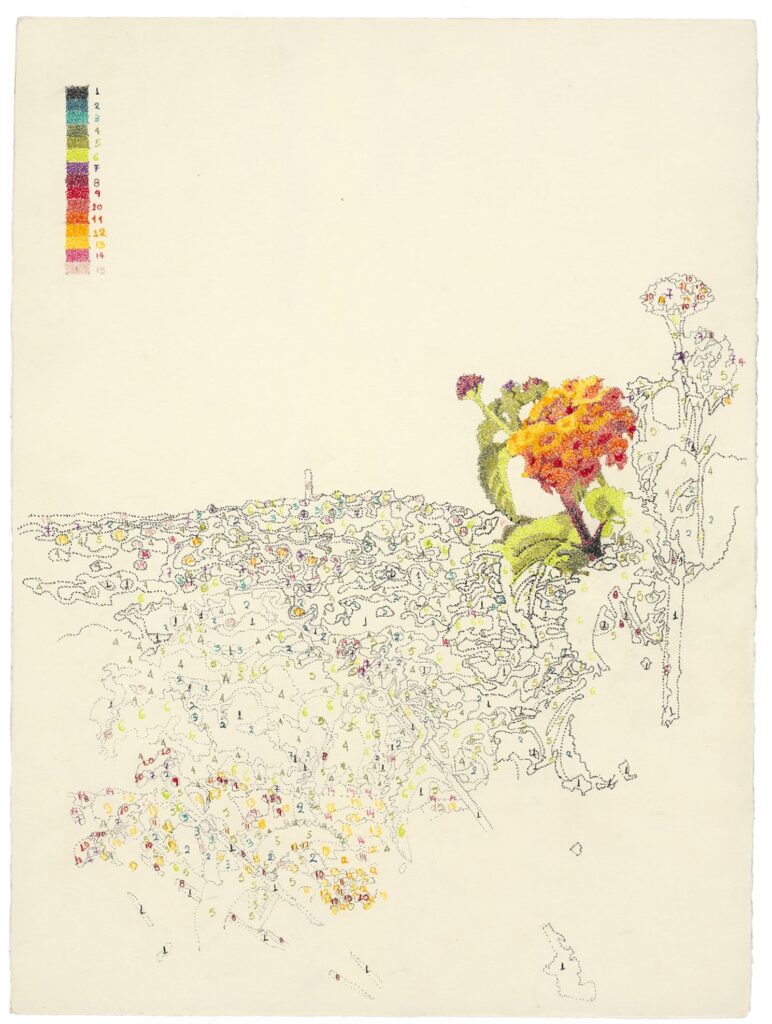 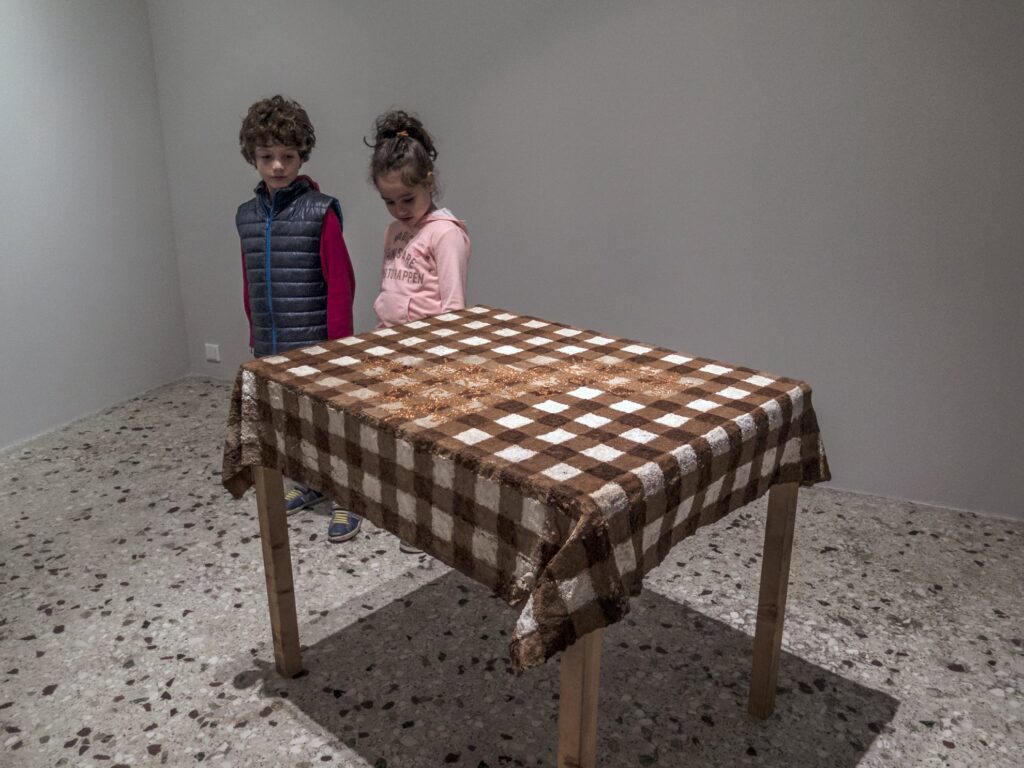